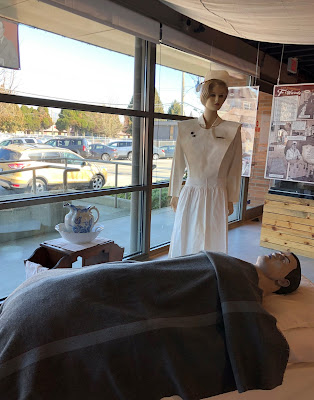 I plan to go forward in time with my MacNeil research but have been finding life very distracting lately. Sometimes world wide events sneak up on you and hit you with a wallop! So, I haven't gotten very far with the MacNeils this week. My thoughts have been straying to current events.

We live in a time when news is disseminated quickly giving us time to prepare for what is coming or not, depending on how our leaders take the news. We can tune into what is happening in real time or access it within hours or days of the latest updates. But what happened in the past? How did our ancestors learn about momentous events that were coming and how did they prepare?

Communication was no where near as instantaneous as it is today when my father was holidaying in the Channel Islands in 1939 when Britain declared war on Germany. I don't know how he received the news on Jersey but as soon as he did, he cut his vacation short and returned home to London. News of this world wide event and speculation about what was to come was wide spread and gave people time to prepare. In my father's case, it gave him time to determine which of the armed services he would volunteer for.

World War II was an event that was well covered so that people could get the latest news through various outlets; the news that their governments wanted to give them, that is. The use of propaganda was widespread. Media coverage had improved from World War I but it was World War I that preceded and, no doubt, aided the spread of what came to be known as the Spanish Flu.

That flu hit while world leaders were distracted by the ongoing conflict. In fact, the misnomer Spanish Flu, was given to the disease because Spain, who was not a combatant in WWI, published news about the affects of the flu in their country, while the combatant countries suppressed news of the flu. Movements of troops helped to spread the flu as did civilian gatherings to raise money for the war effort.

I was wearing my historian hat when researching the 1918 pandemic for part of the story covered in the latest exhibit at PoCo Heritage Museum (currently closed due to social distancing measures). My reading showed that it truly was a world wide event that was poorly managed, although it must be said, there was no real medicine to combat the disease in 1918. But we have had time to practice since then and medicine has made quantum leaps forward. 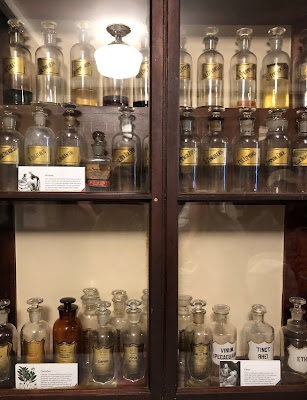 Medicines on display at the drugstore at Burnaby Village Museum

What surprises me when I do research on my family in this era, is that the flu didn't seem to come into their stories at all. It was like it was a non-event although millions of people were affected. It makes me wonder if there will be anything I can find out about how my family or the places they were living, were changed by the pandemic. I'm itching to do some research on my family's flu experience but that's what always happens. I get distracted by another potential story and leave the one I am working on half done. I better finish the MacNeil research that I started first.

Back to Nova Scotia Research

When I went looking for the Scottish origins of John Breac MacNeil, I didn't get far. Not only was he a Catholic which made records almost impossible to find, but both of the places which were listed as his starting place in the old country had been subject to wide emigration and, in many cases, clearances. I am not sure that I will be able to find out anything about John Breac MacNeil in Scotland. Possible future research in Scotland includes the Highland Archive Centre in Inverness and the National War Museum in Edinburgh. A description of the museum library's holdings states: *"Particular strengths are the collection of regimental histories and holdings of the Army Lists from the 1740s." That gives me hope that there may be information about the 82nd Regiment which brought John Breac MacNeil to North America.

If I can't take the research on John Breac MacNeil's line backwards at this point perhaps, I can take it forwards. To do that I have taken the information from Rankin's genealogy and set it in a more readable form which you can see in the table below. This genealogy is a problematic source as it was drawn from people's memories. As a source memory can be faulty. When doing research, primary source documentation is preferred but you can only use what you can find.

Wills are a primary source that might give me some more concrete information about this extended family. So, I will look for the wills of John Breac MacNeil's children and see what they can tell me about family connections. It would be nice if I were able to find John Breac MacNeil's children in the census with their families but the first nominal census for Nova Scotia wasn't until 1871 which was too late to chronicle most of this extended family.

It looks like I also have a further problem. There are other locations listed in the table that are not in the area of Nova Scotia that I am familiar with. In the area that includes Malignant Cove and Doctor's Brook I know that the Roman Catholic Church was at Arisaig so any records, if they still existed, would be found there. I will have to find out more about the locations of Grand Narrows and Georgeville. Just putting these place names in Family Search to see what was available didn't get me very far. I'll have to see what I can find out with the limited resources I can access from home. Stay healthy out there everyone.

HistoryExplorer
Meg is a historian and genealogist who has combined these interests for a deeper look into the social history that molded the lives of our ancestors. As blogs are visual mediums, she will explore her artistic side by using mixed media images as illustrations.